Michael O’Brien was a wealthy wholesale woollen draper based at Ushers Quay in Dublin. On his death in 1829 his estate of £115,000 went to his daughters. Bridget O’Brien, one of Michael’s twin daughters left part of her estate to the Archbishop of Dublin for the founding of a school and chapel for orphan boys to provide them with a good education.

In 1878, two years after Bridget’s death Marino estate, the former seat of Lord Charlemont, was purchased for £8,260 and 30 acres of land were reserved for the Institute and its surrounds.

This gothic style building commenced in 1880, was completed in 1882 and opened for the housing of boys in 1888. It was originally named the “School of the Twin Sisters”, the name is still visible on the plaque over the main entrance. Mr. Liam T. Cosgrave, a former pupil of the school went on to become the President of Ireland.

In the early Twentieth Century financial support dwindled and the O’Brien Institute began to fall into disrepair, the number of boys being catered for was reduced and it eventually closed in 1979.

Ms. O’Brien had stipulated in her will that this building would always be used as a place of learning. Dublin Corporation (now know as Dublin City Council) purchased this site in 1981 in order to provide Dublin Fire Brigade with a dedicated Training Centre, continuing the long history of learning. The first recruits began training in July 1985. Prior to the purchase of the OBI, Dublin Fire Brigade had carried out recruit training in Kilbarrack Fire Station. 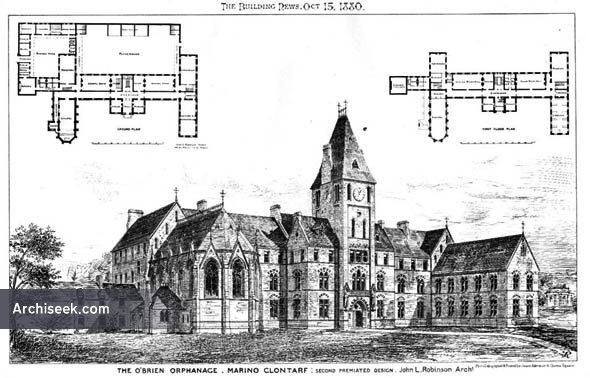 Drawing of the O'Brien Institute