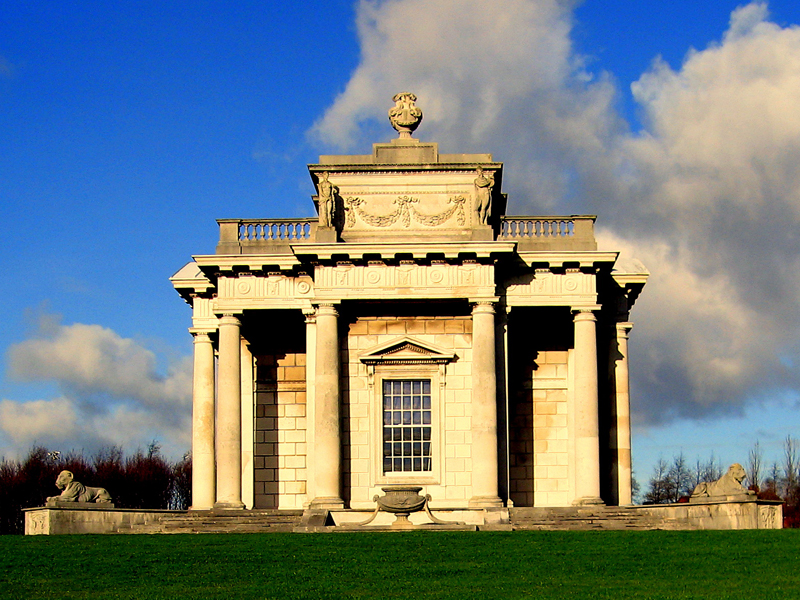 10 minutes from the school, what could this temple like structure be, and where was it beamed down from, maybe it was a film set?

In fact the Casino at Marino was built in the 1760s in the grounds of Marino House, a hunting lodge inherited by James Caulfeild (1728-99), first Earl of Charlemont.(recognise the name of a housing estate close by).

The Casino was designed by Sir William Chambers as a pleasure house for James Caulfield, 1st Earl of Charlemont.It is considered to be one of the finest garden temples in Europe, The Casino,  (Italian for Little House), surprisingly contains 16 finely decorated rooms, endlessly rich in subtlety and design. It is a remarkable building - both in terms of structure and history.

Caulfeild was a major patron of the arts and spent nine years on a Grand Tour of Europe, studying Greek and Roman ruins.  Unusually for the time, his travels brought him as far as Asia Minor.  On his return, he demonstrated his love for Classical architecture by commissioning the Casino as a pleasure house in his estate.

Designed as a Classical structure, the Casino was his way of bringing the Grand Tour home to Ireland.

Caulfield met his architect, Sir William Chambers (1723-96), on his travels.  Chambers is not believed to have visited Ireland but instead sent drawings and instructions over from London.  These were executed by Simon Vierpyl (c.1725-1810), a sculptor and stonecutter. The fact that Chambers never visited proved very useful during restoration in the 1970's, because the plans very every aspect were so detailed.

The Casino was built in a neo-Classical style.  Caulfeild attempted to emulate the ancient buildings he had seen on tour instead of the Renaissance interpretations of them that he had seen in much of contemporary Georgian architecture.

The Casino is located at Marino, just off the Malahide Road and only three miles north of the centre of Dublin.